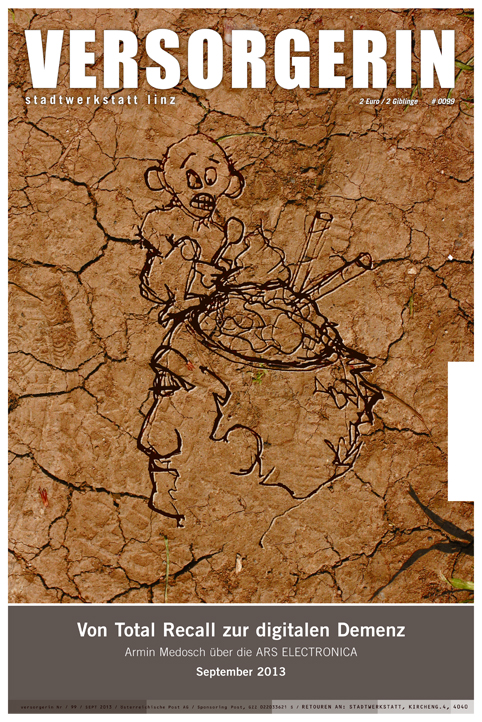 Year by year Ars Electronica gets larger, greater and more successful. One visible sign of this success are the blinking lights of the AEC at night, like an upgraded spaceship out of »Close Encounter of the Third Kind«.

The festival now also has a venue, the former tobacco factory ‚Die Tabakfabrik‘, that can now cope with the rising numbers of visitors each year. Ars Electronica is a success story, no doubt about that. At the same time the Festival has developed a dynamics of its own, whereby the size of the program gives the impression that quantity comes before quality. The festival has defined as its primary objective to ignite a debate around art, technology and society. But this debate often seems to be held in a quite one-sided way.

This year‘s subject matter at Ars Electronica is Total Recall – the Evolution of Memory. The interpretation of the topic relies – at least regarding the conference – for most parts on the natural sciences and primarily on neuro-science, including also a few biologists and geneticists as speakers. The one and only cultural science panel deals with prehistoric memory. Topics such as different memory cultures or the role and function of archives as a critical resources, that question (our) understanding of history and the present, are only occupying a niche position at Ars Electronica.

And yet Ars Electronica only continues with a long tradition, by uncritically incorporating a positivistic view of science whilst riding the waves of hype about technological innovations. The point is, that this criticism isn´t new either. In 1998, when Ars Electronica chose the topic of ‚Infowar‘ media philosopher Frank Hartmann wrote [1]:

»Interestingly enough, the word »culture« has hardly been heard at this conference, which in the end is part of a cultural festival. The social aspects of cyberwar have been excluded. It seems to me that one wanted to decorate oneself with a chic topic that reflects the Zeitgeist, while avoiding any real risk by putting the screen of the monitor as a shield between oneself and the real danger zones.«

These are the words of the same Frank Hartmann who will speak at the Ars Electronica conference as one of the few non-natural scientists this year. Ars Electronica manages to discuss the Evolution of Memory in an utterly de-politicised manner, and that only months after Edward Snowden exposed the existence of the NSA‘s gigantic surveillance program that exceeds anything that we have known before. Even the film Total Recall with Arnold Schwarzenegger presents a more critical stance, at least there we have a proper uprising.

Part of Ars Electronica‘s tradition is the transfer of natural scientific terms into cultural and social fields. Timothy Druckrey noticed this already in 1996, when Ars Electronica happily took Richard Dawkin‘s pseudo-science of Memetics on board. Druckrey complained that »despite of all that aura of universality that surrounds genetic research, [...] reflection on cultural impact gets lost.« And further:

»In the whole discussion around viruses, ecosystems and networks biological metaphors are omnipresent. The collapsing boundaries between physics and genetic science give the impression that systems-ideology has formed a unifying field where the so called »universal« language of molecular or gene technology works in the same way as software does in a mechanical world. Scientific practice becomes consequently rather instrumental than analytical, rather interactive than observing (monitoring), and is far more interested in the technical production than in epistemology.« [2]

What is so bad about that? Richard Barbrook formulated it more casually, during his critical deconstruction of meme-theory: in Linz, Hitler‘ favourite city and cultural capital, one should be very careful with biological metaphors [3]. Boris Groendahl, in the same year, couldn‘t resist to include a similar reference in his posting on the Rizhome mailinglist. And in 1997, when Ars Electronica dealt with the topic of humans as information machines, myself diagnosed that it suffered from a chronic illness of ‚metaphoritis‘ [4].

The pseudo-scientific metaphors that Ars Electronica loves so much, usually taken from genetics and biology, and in recent times increasingly from neuro-science, lead to the naturalisation of social and cultural phenomena. Things that are historical, made by humans and therefore changeable, are assumed to be of biological or of other natural causes, thereby preventing to address the real social causes. In addition, such a manoeuvre legitimates the exercising of power. By saying something is scientific, as if »objective«, a scientific or technocratic solution is implied. The pseudo-scientification leads to the topic being removed from democratic discussion.

In its most harmless form those thought structures can lead to a glorification of science as ideology and religion, as explained in 1996 in Osnabrück by the critical scientist Joseph Weizenbaum. Taken to its conclusion it leads to the de-sacralisation of human life, says Weizenbaum, and finally to the ideology of obsoleteness and the »obliteration« [5] of the human species. Weizenbaum particularly disliked metaphors from the field of Artificial Intelligence.

This also has a long tradition at Ars Electronica. Already in 1979, the founding year of the festival, a robot entertained passers-by in the city centre of Linz. And to this day Japanese robot art and AI are part of the »timeless« subjects of Ars Electronica. Those party poppers who want to take away innocent fun with Asimo for young and old! This year again we are showered with the latest findings in AI, which is an unbroken myth at Ars Electronica.

The deficits in Ars Electronica‘s content are not hard to make out and many key points have already been raised in public speech. Ars Electronica, however, displays an amazing resilience against any criticism, or maybe suffers from a special form of digital dementia. »Digital Dementia« is the title of a best selling book by the neuro-scientist Manfred Spitzer. He claims, with the alleged authority of the natural sciences, that digital media are addictive, that using them causes brain cells to die off, and that children loose their learning abilities. Empirical insights which contain a grain of truth are blown up into untenable hypotheses by Spitzer. For this reason he is such a good example of ascribing too much competence to neuro-scientists. That they receive so much attention only shows the bad state of the debate on art, technology and society.

But why pick out the Ars Electronica? One cannot make a festival responsible for a general deficit. However, Ars Electronica has made that connection between art, technology and society its chosen core topic and takes on a very central institutional position that accumulates a lot of resources. The choice and interpretation of topics is shaped by structural reasons - how the festival is socially structured, networked and orientated. Ars Electronica began in 1979 as the crisis of the industrial age became apparent. As co-founder Hannes Leopoldseder anticipated in an editorial in 1982, the structural crisis of the industrial age would only be resolved in the long run by arriving at a new techno-economic paradigm, the information society. The success of Ars Electronica rests on the belief that it has helped to transport Linz into the information age. In doing so it was necessary to instrumentalise art in order to project a glossed over vision of the information age into the sky above Linz. In 1979 Hilmar Hoffmann‘s idea »Art for All« inspired the first »Klangwolke« (Cloud of sound). Information society was a vision of the future and somehow one suspected that participation would play a significant role in it. Thats why people were asked to put radios on their window sills in 1979.

»Klangwolke« long since has degenerated into an event that illustrates the idea of the ‚society of the spectacle‘ by deploying a high-tech aesthetic which only demonstrates to people their own powerlessness. Thereby the real function of information technologies in the globalised neoliberal economy gets disguised. IT serves such profane ends as the automation of production and global logistics chains. IT allows corporations to outsource labour, build factories void of human people and synchronize everything via global logistic chains - which is nothing else but an euphemism for surveillance systems.

Through the way how it has addressed information technologies since 1979 Ars Electronica has concealed their real consequences in a neoliberal information society. For this it has used again and again flowery metaphors which seemingly break down barriers between cultural and scientific domains in a pseudo-progressive way. According to Duckrey, Ars Electronica has in 1996, with their frequent references to a »natural order«, »reduced diversity, complexity, noise and resistance, blending out the cultural politics of memory in the age of Memetics.«

This year it seems that one has kept well away from the implications of the Snowden affair. What this has shown is that it is no longer about surveillance in the classical sense. The supremacy of the United States as the one and only super power is based on establishing and maintaining a global information infrastructure that secures her military and economic dominance. The US-American empire is based on a hegemony of information: the ability to filter flows of information, bundle them and transform these capabilities into military and financial power.

As the Snowden affair also clearly showed, total information control is always partially illusory, a control fantasy. But for the exertion of power it is enough to establish these kind of mirages of power, codify them as goals, use them in order to mobilise resources, and make those goals appear desireable to their subjects, because only this way security can be ensured. These tendencies were already inscribed at the beginning of the information revolution that had started in the Cold War era. Yet we are barely aware of this, as digital dementia makes everything disappear in a misty cloud.

Translated from the German by Simone Boria