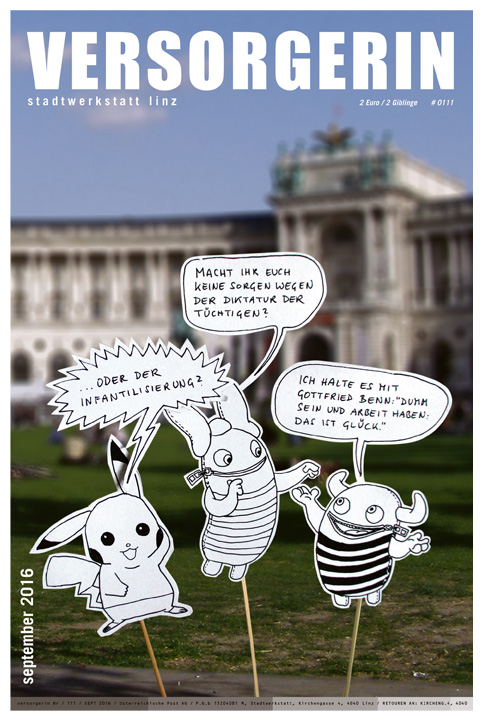 This year, Eleonore summer residency »RADIO ACTIVE: SINK and SWIM« invited Tetsuo Kogawa of Polimorphous Space, an influential figure in underground radio art, Mini-FM, microradio, as our honorable resident. Due to health reason, finally Tetsuo could not make it to Linz. While preparing for his possible visit, he discussed with Franz Xaver, director of Stadtwerkstatt, about making salt water antenna, VLF transmitter for crossing Danube radiojam experiments and issues surrounding radio licences. To quote one part of their exchange:

Tetsuo Kogawa: My first commitment to pirate radio started with 7MHz band in the 50s using 807 and 832A tube. At the time there was a special band for pirates called »uncover band« (maybe Japaenglish). So 7MHz band is my old home. But this home was not full of dream: a couple of my friends were arrested for that. I don‘t know if I have enough time to prepare it but I plan to use a hand-made transmitter of 50 watts which could reach to your area over the live transmission. I don‘t want to use a ready-made transmitter. In the same reason, I will never rely on the license: that‘s my basic policy. The point is what we can do without license--governmental charity and commercial service.

Franz Xaver: We did a lot in pirate radio in the 80’s. We built a (pirate radio) balloon with an RF Power of 15 Watt, we had pirate stations in Linz, Graz and Vienna. In 1992, we published a paper »freie Frequenzen offene Kanäle« (free frequency open channels). While some members of our group voted for »open access« radio channels from 88-107 Mhz. I am for using legitimately the free frequencies for art through appealing to the government. With this action, a free independent radio station »radio FRO« housed in Stadtwerkstatt was born and has been broadcasting on 105Mhz since 1997.

We need to look back at Franz Xaver’s own history of working with frequencies:

Flash forward - during Eleonore summer residency this August, Xaver caught up with artist Nicolas Montgermont from Paris. Nicolas works with sound waves mainly through the vibration of materials and their propagation, natural and artificial electromagnetic waves in the form of radio landscapes, gravitational and sidereal energies through the double prism astronomy / astrology. His residency project, Axis Mvndi, sends radio waves into space to draw shapes at a cosmic scale.

Franz Xaver: Years ago Stadtwerkstatt made a conference with the title »fernsehen der 3. Art«. All the organizations who run this conference made a yellow paper to press free frequencies for art and public access for radio broadcasts. Now 24 years later we have a lot of open public access channels. For example in Linz is Radio FRO and DORF TV. But our demand for frequencies in art (years ago called media-art), nothing happened. The internet in the 90’s covered lots of many access issues. For me, at this time, there is in need of a logic step for a new art-context. A context which eliminates barriers of rooms for electronic installations. We need to take the installation to a dynamic electromagnetic field. No architecture is a postulation for stadtwerkstatt at the moment, but we are far away from making frequencies available for artists. My question to Nicolas: You are artist of the next generation and you are working with the same material as we did 24 years before. Is there a relationship between your work and our request for free frequencies? and what is your relation between art and the electromagnetic field?

Nicolas Montgermont: I see the radio spectrum as a public space like any other. 20/30 years ago when frequencies were liberated all over Europe for free radio and TV, we have seen an important movement in democratizing this space as it was now possible to broadcast with a non-official voice and for some of them with a non-commercial logic. But after all these years, most of the free radios emerging from this period use a similar format: a temporal grid, dividing the broadcasting in one hour shows, with musical and »interviews in the studio« content. All this content often goes in an independent emitting service paid by the radio. This format is really efficient, but it makes very difficult all the experiments concerning the radio spectrum in itself, and specially concerning the physical relationship one can have with a radio wave and its propagation.

To work with this spectrum, an artist often has to be »tolerated«, except if he has a ham radio license in certain case. For example - broadcasting on the same frequency with many emitters dispatched inside a building, and having the audience walk around with a usual FM radio receiver, getting different content as he moves from a place to another1 - can‘t be realized in a legal context. The limit set by the EU in 2013 for a personal FM transmitter is 50 nW2, where a commercial radio usually broadcast with more than 1 kW ie. 20.000.000.000 times more powerful... there is no competition. Translated, it means you can‘t legally broadcast in the FM band further than 1m away...

Nowadays, it is a big constraint because the physical reality of the waves is a fundamental difference between Internet and a radio. This physicality has a strong potential in art, as it allows connecting places with a tangible relationship, therefore developing a poetry of the transmission that you can‘t work in the same way with digital signals in cables. The radio signals also have a very wide scale of usage, broadcasting at the dimension of a room, a building, a city, a continent or even in the deep space. It is easy to imagine how this creates a wonderful material for artists to work with. In other fields of the public space, some usage needs licenses or diplomas: driving a car, constructing a bridge, … but you also have the fundamental right to walk as a pedestrian, the EM spectrum needs such spaces that can be used by anyone…